KINO SIEMENSSTADT
The image of the city in the cinematic space

In a thirteen-week online program, the series KINO SIEMENSSTADT engages with the question of how the themes of space and architecture are reflected in artists’ films and video art today. How does contemporary art succeed in translating urban history and stories into moving images and to what extent can it further the current discourse on (historical) architecture, even and particularly when its intentions reach beyond the purely documentary?

The title KINO SIEMENSSTADT refers to the former film theatre at Nonnendammallee 96 in the direct vicinity of SCHARAUN – Interdisciplinary Project Space for Art and Architecture. As one of two cinemas in Berlin Siemensstadt, it was one of the few entertainment facilities for Siemens workers and their families from 1931 to 1962. Films are no longer shown here today. Like so many cinemas, it had to make way for other purposes: presently, the textile discount chain KIK offers its goods there.

The scenario of endangered or even perishing cinemas has existed longer than Corona. Even before the pandemic, movie theatres were reporting striking declines not only regarding the numbers of visitors but also the quality of films. Over its course, the shutdown seems to have amplified this trend in recent weeks: some of the new productions didn’t even take the “detour” via cinemas but opened directly as streams on Netflix and Co instead. The Siemensstadt cinema will certainly not be the last of its kind forced to yield to discount chains.

Meanwhile, the art scene and not least SCHARAUN with KINO SIEMENSSTADT are opening up to new experimental realms in the face of restricted access to real-world exhibition spaces and the no longer existent movie theatre, in an attempt to determine whether the presentation of art is also possible on the Internet as a simulation of cinema. The moving image — artistic film and video — seems particularly appropriate, seeing that consumers have grown increasingly accustomed to streaming services in recent years. Nonetheless, the question remains: does this really work in the art context?

To find out, Jaro Straub, director of Project Space SCHARAUN, invited Olaf Stüber to collaborate on programming a series with a special — and obvious — focus on architecture and the city. The series opens on Friday 29th May at 6 pm with two films by Anri Sala . “Long Sorrow“ from 2005, filmed on the 18th floor of a residential building in Berlin’s Märkisches Viertel, creates a cinematic sightline to Berlin-Siemensstadt’s modernist settlement architecture where SCHARAUN is based. The films will be available online at www.scharaun.de for six days, before the countdown to the next program sets in.

At the end of August 2020, SCHARAUN will present a selection of the works previously featured online in a “real space” installation setting. Including its own space, the Infostation Siemensstadt and various other locations, the online experiences will thus be reflected upon against the backdrop of a presentation with a physical audience, a collective viewing experience and direct encounters with the represented works.

Scharaun is an interdisciplinary project space for art and architecture in Berlin Siemensstadt.The exhibition space is located in an apartment complex from the 1930s, which was built by the architect Hans Scharoun for the workers of the nearby Siemens factories. Together with his wife Aenne, Scharoun lived and worked in an apartment inside the same building from 1930 to 1960. 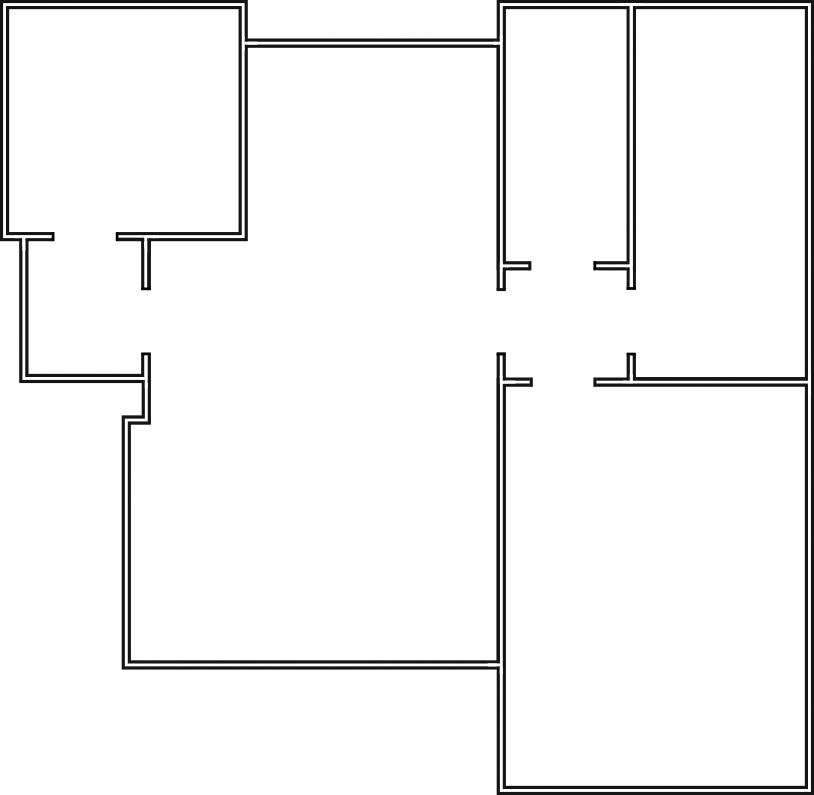 Although no photographs of the kitchen in its original state have survived, due to its limited dimension, it is to be assumed that a Frankfurt kitchen was installed. In later projects Scharoun continuously used the compact built-in model of a kitchen. The original floor plan also shows that a hatch or passageway to the dining area, which later maybe got rebuild.
02 Living space

The east-west oriented living room is illuminated from the flower window as well as from the balcony. The "durchgesteckte Zimmer" replaced the classic corridor supply. The room was originally divided into dining and living area, with the dining area located directly in front of the flower window.
03 Bathroom

The original floor plan shows that Scharoun planned the bathroom including the bathtub. What seems normal today was a rare luxury in 1930, which was only made possible by the local block heating station (Blockheizkraftwerk) supplying the house. Due to the central heat supply, the previously standard charcoal stove becomes obsolete.
04 Children's room / Archive

The room labeled as "Kammer" in the original floor plan, must have been used as a children's room in most cases. By today's standards, 12 square meters for a children's room are rather scarce, but in co-use with the spacious living area, the concept offers adequate individual space for every family member.
05 Bedroom

The spacious bedroom has direct access to the loggia. The window front offers a straight view of the Jungfernheideweg and the small park area in front of the building designed by landscape architect Leberecht Migge.
06 Flower window

The generous flower window connects the green courtyard – the outer – with the interior zone of the apartment. Scharoun's use of the flower window was not only based on an aesthetic consideration, but also increased a quality for the apartment in terms of both energy and room climate.
07 Loggia

The enclosed loggia is accessible from both the living room and the bedroom, thus extending the living area.
Subscribe to the Newsletter