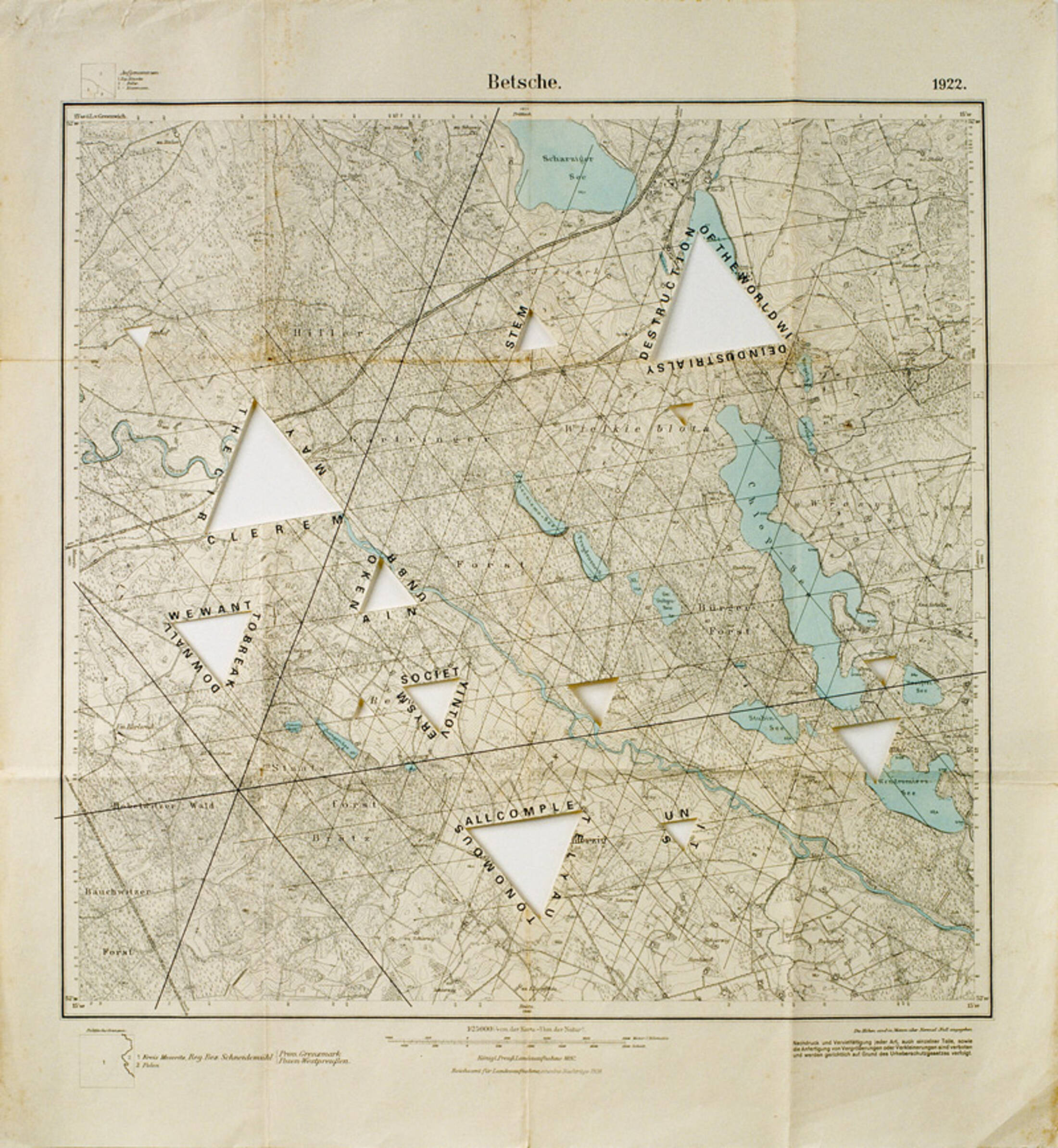 The installation May The Circle Remain Unbroken revolves around ideas of individual, anarchic freedom and their relation to space, society and nature. In the 16-mm film Loboda a solitary hut next to a lake is portrayed from different angles. The cabin stands for different modes of withdrawal from society. As a place beyond social obligations the hut has served as a starting point for people like H.D.Thoreau* or the Unabomber** to develop a fundamental critique of society in word (Thoreau) and deed (Unabomber).

The film is accompanied by a series of historic maps that are altered into counter culture manifestos, using text passages from poems of Transcendentalists such as Ralph Waldo Emerson, the lyrics of psychedelic bands from the 60ies and excerpts of the Unabomber’s manifesto. A third element is the sound work His Living voice, a transistor radio emitting a monotonous voice*** speculating about Aristocracy, Truth, Nature and the relationship between the individual and the society. The monologues are interspersed with the song May the circle remain unbroken by the psychedelic rock band the 13th Floor Elevators****.

*H.D. Thoreau (1817-1862), probably the first 19th century dropout. Moves on 4th July 1845 to the woods of Concord Massachusetts for 2 years. During his time at the lake he starts writing the book Walden (A life in the woods) in which he chronicles his experiment in self-sufficiency. Besides the descriptions of his self-determined life in Nature, “Walden” also contains a harsh critique of society’s increasingly materialistic value system. After several revisions the book is finally published in 1854.

**Unabomber, actually named Theodore John Kaczynski, born May 22nd 1942, mathematician, who withdraws from university life to a hut in the woods of Montana in 1969 where he lives until his arrest on April 3rd 1996. Kaczynski is a fundamental critic of the technological society, who sent mail bombs to various people over a period of almost 18 years, killing 3 and wounding 29.

On September 19th 1995 the Washington Post publishes his manifesto: “The industrial Society and its future”, because Kaczynski had offered to stop the bombings in return. After a hint from Kaczynskis brother the FBI manages to arrest him. He was the target of the FBI’s most expensive manhunt in history. Kaczynski is serving a life sentence without the possibility of parole in the Federal ADX Supermax prison in Florence, Colorado.

***These fragments are taken from speeches held by the American architect Frank Lloyd Wright (1867-1959) to his students. Wright lived most of his life in a self-designed resort named Taliesin, which was first situated in the rural Wisconsin countryside and later in Scottsdale, Arizona. In 1932 Frank and Olgivanna Lloyd Wright established the Taliesin Fellowship, a self-sustaining community of apprentices and architects who worked and lived with Wright, and where addressed by his Sunday morning monologues.

****13th Floor Elevators (1965-1969), rock band from Austin Texas formed by Rocky Erickson. They are the first band to refer to their music as psychedelic rock promoting the use of chemical agents (such as LSD) as a gateway to a higher, ‘non-Aristotelian’ state of consciousness. May the circle remain unbroken is the last track of their last Album Bull of the Woods, and one oft he few songs on this album with Rocky Erickson still singing, before he submitted himself to a psychiatric hospital.